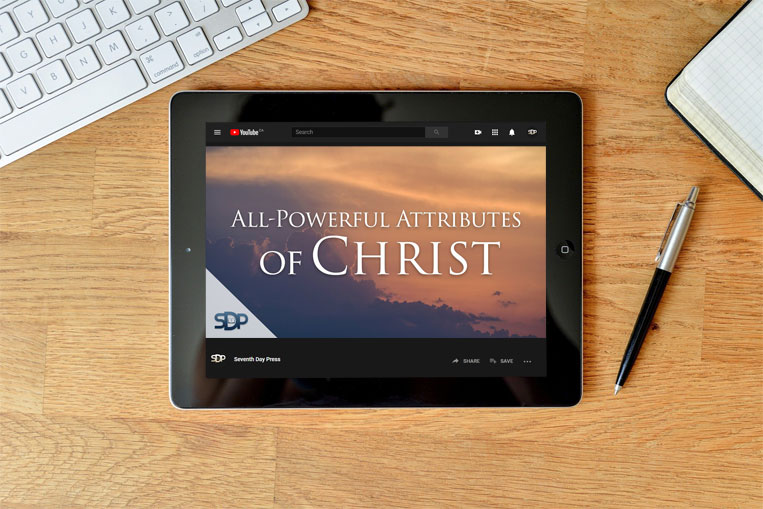 God is omnipotent, omniscient, immutable.  He always pursues a straightforward course. His law is truth—immutable, eternal truth.  His precepts are consistent with His attributes.  But Satan makes them appear in a false light. By perverting them, he seeks to give human beings an unfavorable impression of the Law-giver. Throughout his rebellion he has sought to represent God as an unjust, tyrannical being. Signs of the times, July 23, 1902, par. 12

He hid within himself those all-powerful attributes which belonged to him as one equal with God.  At times his divine character flashed forth with such wonderful power that all who were capable of discerning spiritual things pronounced him the Son of God. (Spirit of prophecy volume 3, 259.1)

1. The Son of God is Omnipotent

Who, being in the form of God, thought it not robbery to be equal with God: Philippians 2:6

Christ was not compelled to endure this cruel treatment. The yoke of obligation was not laid upon Him to undertake the work of redemption. Voluntarily He offered Himself, a willing, spotless sacrifice. He was equal with God, infinite and omnipotent. He was above all finite requirements. He was Himself the law in character. 12Ltms, ms 101, 1897, par 27

(5) And one of the elders saith unto me, Weep not: behold, the Lion of the tribe of Juda, the Root of David, hath prevailed to open the book, and to loose the seven seals thereof.  (6)  And I beheld, and, lo, in the midst of the throne and of the four beasts, and in the midst of the elders, stood a Lamb as it had been slain, having seven horns and seven eyes, which are the seven Spirits of God sent forth into all the earth. Revelation 5:5-6

The Saviour is presented before John under the symbols of “the Lion of the tribe of Judah” and of “a Lamb as it had been slain.” Revelation 5:5, 6. These symbols represent the union of omnipotent power and self-sacrificing love. The Lion of Judah, so terrible to the rejectors of His grace, will be the Lamb of God to the obedient and faithful. Acts of the Apostles, 589.2

2. The Son of God is Omniscient

And unto the angel of the church in Sardis write; These things saith he that hath the seven Spirits of God, and the seven stars; I know thy works, that thou hast a name that thou livest, and art dead. Revelation 3:1

Note: Every individual is under the supervision of Jesus.

[Quoting Revelation 3:1-3] The discrimination revealed by Christ in weighing the characters of those who have taken to themselves His name, as Christians, leads us to realize more fully that every individual is under His supervision. He is acquainted with the thoughts and intents of the heart, as well as with every word and act. He knows all about our religious experience; He knows whom we love and serve. 15LtMs Ms 81, 1900, par. 55

(18) And unto the angel of the church in Thyatira write; These things saith the Son of God, who hath his eyes like unto a flame of fire, and his feet are like fine brass;  (19)  I know thy works, and charity, and service, and faith, and thy patience, and thy works; and the last to be more than the first. Revelation 2:18-19

Note: There is no place where the eyes of Jesus cannot penetrate.

Yet a little while, and He that is to come will come and will not tarry. His eyes as a flame of fire penetrate into the fast-closed dungeons and hunt out the hidden ones, for their names are written in the Lamb’s book of life. These eyes of the Saviour are above us, around us, noting every difficulty, discerning every danger; and there is no place where His eyes cannot penetrate, no sorrows and sufferings of His people where the sympathy of Christ does not reach. They reach the persecuted ones everywhere. Inasmuch as ye have done this to one of the least of My brethren, ye have done it unto Me. Every deed of darkness that Satan united with wicked men may do, Christ’s eyes like a flame of fire detect, and it is noted and registered by the great Heartsearcher.  4LtMs, Ms 56, 1886, par. 15

3. The Son of God is Omnipresent

(18) And Jesus came and spake unto them, saying, All power is given unto me in heaven and in earth.  (19)  Go ye therefore, and teach all nations, baptizing them in the name of the Father, and of the Son, and of the Holy Ghost:  (20)  Teaching them to observe all things whatsoever I have commanded you: and, lo, I am with you alway, even unto the end of the world. Amen. Matthew 28:18-20

In giving His commission to His followers, Christ did not tell them they would be left alone. He assured them that He would be near them. He spoke of His Omnipresence in a special way. Go to all nations, He said. Go, to the farthest portion of the habitable globe, but know that My presence will be there. Labor in faith and confidence, for the time will never come when I shall forsake you. 12LtMs, Ms 138, 1897, par. 21

Why is the equality of Christ important?

But who that is not infinite can understand the infinite?  Christ declares, “No man knoweth the Father but the Son, and he to whomsoever the Son shall reveal him.” It is recorded of Epictetus that when his hearers said to him, “You have uttered many excellent things of God; but we cannot as yet understand what he is,” he truly and nobly replied, “Were I able fully to set forth God, I should either be a god myself, or God himself would cease to be what he is.” The greatness of God cannot be measured or comprehended. And that doctrine that denies the absolute Godhead of Jesus Christ, denies also the Godhead of the Father; for no man knoweth the Son but the Father. Spirit of Prophecy Volume 3, 259.1

Since the divine law is as sacred as God Himself, only one equal with God could make atonement for its transgression. None but Christ could redeem fallen man from the curse of the law and bring him again into harmony with Heaven. Patriarchs and Prophets, 63

In order to fully realize the value of salvation, it is necessary to understand what it cost. In consequence of limited ideas of the sufferings of Christ, many place a low estimate upon the great work of the atonement. The glorious plan of man’s salvation was brought about through the infinite love of God the Father. In this divine plan is seen the most marvelous manifestation of the love of God to the fallen race. Such love as is manifested in the gift of God’s beloved Son amazed the holy angels. “God so loved the world, that He gave His only-begotten Son, that whosoever believeth in Him should not perish, but have everlasting life.” This Saviour was the brightness of His Father’s glory and the express image of His person. He possessed divine majesty, perfection, and excellence. He was equal with God. “It pleased the Father that in Him should all fullness dwell.” “Who, being in the form of God, thought it not robbery to be equal with God: but made Himself of no reputation, and took upon Him the form of a servant, and was made in the likeness of men: and being found in fashion as a man, He humbled Himself, and became obedient unto death, even the death of the cross.” Testimonies to the church volume 2, 200.1

That he (Christ) might reach sinners where they were, he encircled the race with his long human arm, while with his divine arm he grasped the throne of the Infinite, uniting finite man to the infinite God, and connecting earth with heaven. RH August 15, 1899, Art. A, par. 2

Our Saviour is truly divine with all-powerful attributes.