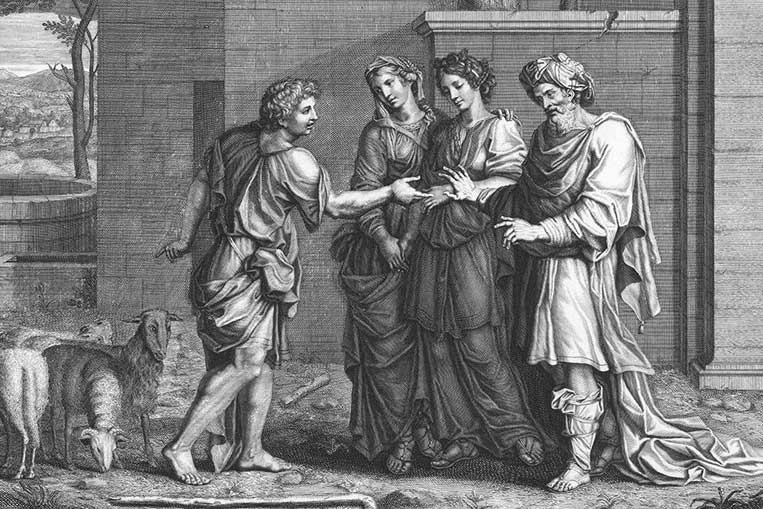 Rachel means “lamb.” She was the beloved wife of the patriarch Jacob. Beautiful in form and appearance, Jacob worked 14 years for her hand. After being barren for many years, the Lord opened her womb, and granted her two sons.

Despite her great love for Jacob and their union in marriage, her life was a turbulent one. Barren for many years, and having her sister thrust into her marriage and love story with Jacob, there was much unhappiness and instability in her home life. She fell prey to the wiles of Satan as well. Taking things into her own hands, she offered her servant to Jacob, as did Leah, making four wives for Jacob instead of the already too many two. She was also guilty of stealing her father’s idol when leaving his home, thus breaking the second and eighth commandment. Later, she would lie about it, thus breaking the ninth as well. In spite of this, she is recognized as a matriarch of the people of God. Her son, Joseph, played an important role in the preservation of the people of God.

She is also portrayed in the Bible as the spiritual mother of the faithful martyrs:

“In Rama was there a voice heard, lamentation, and weeping, and great mourning, Rachel weeping for her children, and would not be comforted, because they are not.” Matthew 2:18

Just as Esau persecuted Rachel, Jacob, and their family, Herod, a descendent of Esau, would persecute the promised seed by commanding the death of all the male children in Bethlehem (Rachel’s seed) under the age of two. Many other faithful Christians would give their lives for their faith in the centuries and millennia that followed:

“They were stoned, they were sawn asunder, were tempted, were slain with the sword: they wandered about in sheepskins and goatskins; being destitute, afflicted, tormented; (Of whom the world was not worthy:) they wandered in deserts, and in mountains, and in dens and caves of the earth.” Hebrews 11:37-40

Just as Rachel and her family overcame sin and idolatry, burying them under the oak tree at Shechem, we talked about the spiritual oak, the cross, where we can come daily, leaving all of our own weaknesses, sins, and burdens, and being transformed, finding there our only glory:

“But God forbid that I should glory, save in the cross of our Lord Jesus Christ, by whom the world is crucified unto me, and I unto the world.” Galatians 6:14

We ended the meeting realizing that while we may not be called to be martyred for our faith, we can die daily, allowing Christ to live in us, praying that there might be a fulsome harvest from our lives lived in Jesus.

“And when he had called the people unto him with his disciples also, he said unto them, Whosoever will come after me, let him deny himself, and take up his cross, and follow me. For whosoever will save his life shall lose it; but whosoever shall lose his life for my sake and the gospel’s, the same shall save it.” Mark 8:34, 35

“Verily, verily, I say unto you, Except a corn of wheat fall into the ground and die, it abideth alone: but if it die, it bringeth forth much fruit. He that loveth his life shall lose it; and he that hateth his life in this world shall keep it unto life eternal.” John 12:24, 25