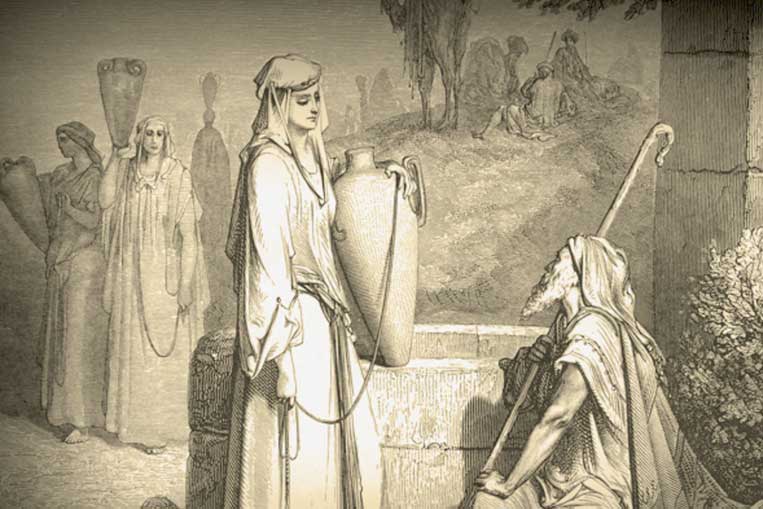 Rebekah means “kind.” The main theme we studied in the life of Rebekah was the concept of the “election.” Though it may appear at first glance that the Lord’s choosing of Rebekah for Isaac’s wife, and of Jacob to perpetuate the promised seed, is a case of what is commonly referred to in parts of the Christian world as “predestination” (Romans 8:29; 9:10-14, 23-24, Ephesians 1:4-5), the Bible does not teach this. Rather, the Lord calls and chooses everyone, but it is up to us to be faithful and to make our calling and election sure (2Peter 1:10, Revelation 17:14b):

“The predestination, or election, of which God speaks, includes all who will accept Christ as a personal Saviour, who will return to their loyalty, to perfect obedience to all God’s commandments… All who are willing to be saved by Christ are the elect of God. It is the obedient who are predestinated from the foundation of the world.” The Gospel Herald, June 11, 1902. (See also 1T 503.1 and 2T 144.2)

What may appear as predestination is actually a) the Lord knowing the beginning from the end, and b) the Lord working with our will. In other words, the Lord knew Jacob’s qualities and choices, versus those of Esau, beforehand because He is omniscient, thus selecting the spiritually-minded brother over the carnally-minded brother.

“Jacob and Esau, the twin sons of Isaac, present a striking contrast in character and in life. This unlikeness was foretold by the angel of God before their birth. In answer to Rebekah’s troubled prayer, he declared that two sons would be given her. He opened to her their future history, that each would become the head of a mighty nation, but that one would be greater than the other, and the younger would have the pre-eminence.” Ep 113.1

In the case of Rebekah, while the Lord had certainly seen her qualities and intended her for Isaac, she willingly chose to engage her will to fulfill God’s plan for her life, an example of human will working with, and surrendering to, the divine.

“After all had been arranged, the consent of the father and brother had been obtained, then Rebekah was consulted, whether she would go with the servant of Abraham a great distance from her father’s family, to become the wife of Isaac. She believed from the circumstances that had taken place that God’s hand had selected her to be Isaac’s wife, ‘and she said, I will go.’” The Story of Redemption, p. 85.

May we be like Rebekah, choosing to enlist our will on the Lord’s side, so that we may faithfully fulfill the purpose He has called us to.

We also studied biblical and prophetic counsel on the importance of choosing a godly spouse, and helping your children to select a godly spouse, comparing the marriages of Isaac and Jacob with the forbidden heathen marriages of Esau, and the impact of these marriages both on the parties involved and their broader circles, for time and eternity. See Genesis 24:10, 16-20, 25; 27:46; 28:1, Deuteronomy 7:3-4, PP 175, DG p.29, MYP p. 443; LYL p. 87, EP 115.3

Finally, we studied Rebekah’s character. While we sought to learn from the kindness and generosity that was characteristic of her, we were also warned by her error in persuading Jacob to deceive his father, noting that while Rebekah was right about which son was to inherit the promise of the spiritual birthright, the Lord did not sanction her course of action, and would have brought about His own purpose in His own way and time. If we ever need to resort to a sin to bring about a certain outcome, even if we believe that the outcome is right, the method is not sanctioned by the Lord. We are better off waiting on His timing than marring our life record by our own willful course of action. See Genesis 27:12, 13; Matthew 12:36-37, SR pp. 88-89; EP 114.3, 115.5, 116.2, 117.2-4, PP 180.3