Circumcision, Feast Keeping and Another Jesus 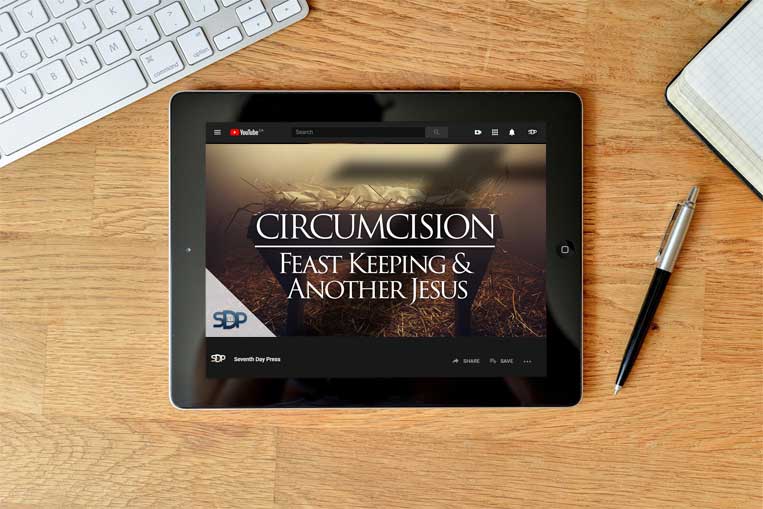 This presentation is divided into 4 parts:

1. Ceremonial Law and the letters of Paul (Messianic Jews’ foundation vs. Paul’s foundation)

I marvel that ye are so soon removed from him that called you into the grace of Christ unto another gospel:  (7)  Which is not another; but there be some that trouble you, and would pervert the gospel of Christ.  (8)  But though we, or an angel from heaven, preach any other gospel unto you than that which we have preached unto you, let him be accursed.
Galatians 1:6-8

Sketches from the Life of Paul pg 122:

Paul’s indignation was stirred. His voice was raised in stern rebuke: “If ye be circumcised, Christ shall profit you nothing.” The party maintaining that Christianity was valueless without circumcision arrayed themselves against the apostle, and he had to meet them in every church which he founded or visited; in Jerusalem, Antioch, Galatia, Corinth, Ephesus, and Rome. God urged him out to the great work of preaching Christ, and him crucified; circumcision or uncircumcision was nothing. The Judaizing party looked upon Paul as an apostate, bent upon breaking down the partition wall which God had established between the Israelites and the world. They visited every church which he had organized, creating divisions. Holding that the end would justify the means, they circulated false charges against the apostle, and endeavored to bring him into disrepute. As Paul, in visiting the churches, followed after these zealous and unscrupulous opposers, he met many who viewed him with distrust, and some who even despised his labors. (LP 122.1)

These divisions in regard to the ceremonial law, and the relative merits of the different ministers teaching the doctrine of Christ, caused the apostle much anxiety and hard labor
(LP 122)

1) James 2:10 For whosoever shall keep the whole law, and yet offend in one point, he is guilty of all.

And when a stranger shall sojourn with thee, and will keep the passover to the LORD, let all his males be circumcised, and then let him come near and keep it; and he shall be as one that is born in the land: for no uncircumcised person shall eat thereof. Exodus 12:48

For I testify again to every man that is circumcised, that he is a debtor to do the whole law. Galatians 5:3

4) Galatians 5:2 Christ profits you nothing

Behold, I Paul say unto you, that if ye be circumcised, Christ shall profit you nothing. Galatians 5:2

A) types done away and what did she consider a type

. . . He had enjoyed the highest educational advantages that Egypt could offer, he was not qualified to engage directly in the work to which the Lord saw fit to call him; he was not fitted to take his place as the visible leader of a vast multitude, receiving from God instruction in regard to framing their laws, and laying the foundation of their economy in a system of types and symbols. . . {YI, December 13, 1900 par. 5}

The whole system of types and symbols was a compacted prophecy of the gospel, a presentation in which were bound up the promises of redemption. {AA 14.1}

The system of types that pointed to Jesus as the Lamb of God was to be abolished at His death; but the precepts of the Decalogue are as immutable as the throne of God. {DA 308.3}

They (Jews) attach as much importance to shadowy ceremonies of types which have met their antitype as they do to the law of the ten commandments, which was not a shadow, but a reality as enduring as the throne of Jehovah. The death of Christ elevates the Jewish system of types and ordinances, showing that they were of divine appointment, and for the purpose of keeping faith alive in the hearts of His people (RH May 6, 1875).

It was Christ’s desire to leave to his disciples an ordinance (communion) that would do for them the very thing they needed,—that would serve to disentangle them from the rites and ceremonies which they had hitherto engaged in as essential, and which the reception of the gospel made no longer of any force. To continue these rites would be an insult to Jehovah. Eating of the body, and drinking of the blood, of Christ, not merely at the sacramental service, but daily partaking of the bread of life to satisfy the soul’s hunger, would be in receiving his word and doing his will. {RH June 14, 1898, par. 16}

3. Fundamental principles of the last 50 years

The principles of truth that God in His wisdom has given to the remnant church, would be discarded. Our religion would be changed. The fundamental principles that have sustained the work for the last fifty years would be accounted as error. (1SM 204.2) August 7, 1904. (deals with the omega of apostasy)

X. That the sanctuary of the new covenant is the tabernacle of God in Heaven, of which Paul speaks in Hebrews 8, and onward, of which our Lord, as great High Priest, is minister; that this sanctuary is the antitype of the Mosaic tabernacle, and that the priestly work of our Lord, connected therewith, is the antitype of the work of the Jewish priests of the former dispensation. Heb. 8:1-5, &c.; that this is the sanctuary to be cleansed at the end of the 2300 days, what is termed its cleansing being in this case, as in the type, simply the entrance of the high priest into the most holy place, to finish the round of service connected therewith, by blotting out and removing from the sanctuary the sins which had been transferred to it by means of the ministration in the first apartment, Heb. 9:22, 23; and that this work, in the antitype, commencing in 1844, occupies a brief but indefinite space, at the conclusion of which the work of mercy for the world is finished. (Fundamental Principle #10 – 1872)

Let Pioneers Identify Truth.–When the power of God testifies as to what is truth, that truth is to stand forever as the truth. No aftersuppositions, contrary to the light God has given are to be entertained. Men will arise with interpretations of Scripture which are to them truth, but which are not truth. The truth for this time, God has given us as a foundation for our faith. He Himself has taught us what is truth. One will arise, and still another, with new light which contradicts the light that God has given under the demonstration of His Holy Spirit. {CW 31.2}

When men come in who would move one pin or pillar from the foundation which God has established by His Holy Spirit, let the aged men who were pioneers in our work speak plainly, and let those who are dead speak also by the reprinting of their articles in our periodicals. Gather up the rays of divine light that God has given as He has led His people on step by step in the way of truth. This truth will stand the test of time and trial. (MR760 pg 10)

4. Final thoughts concerning final days (How does this affect me in relation to the end days?)

A) Doctrine (fundamentals) = transcript of Divine character, does not fit false christ to come so he wants to change them because they will reveal him as false

I saw the Father rise from the throne, and in a flaming chariot go into the holy of holies within the veil, and sit down. Then Jesus rose up from the throne, and the most of those who were bowed down arose with Him. I did not see one ray of light pass from Jesus to the careless multitude after He arose, and they were left in perfect darkness. Those who arose when Jesus did, kept their eyes fixed on Him as He left the throne and led them out a little way. . . Those who rose up with Jesus would send up their faith to Him in the holiest, and pray, “My Father, give us Thy Spirit.” Then Jesus would breathe upon them the Holy Ghost. In that breath was light, power, and much love, joy, and peace. (EW 55)

I turned to look at the company who were still bowed before the throne; they did not know that Jesus had left it. Satan appeared to be by the throne, trying to carry on the work of God. I saw them look up to the throne, and pray, “Father, give us Thy Spirit.” Satan would then breathe upon them an unholy influence; in it there was light and much power, but no sweet love, joy, and peace. Satan’s object was to keep them deceived and to draw back and deceive God’s children. (EW 56)

(3) But I fear, lest by any means, as the serpent beguiled Eve through his subtilty, so your minds should be corrupted from the simplicity that is in Christ.  (4)  For if he that cometh preacheth another Jesus, whom we have not preached, or if ye receive another spirit, which ye have not received, or another gospel, which ye have not accepted, ye might well bear with him.  (5)  For I suppose I was not a whit behind the very chiefest apostles.  (6)  But though I be rude in speech, yet not in knowledge; but we have been throughly made manifest among you in all things. (2 Corinthians 11:3-6)

Those who seek to remove the old landmarks are not holding fast; they are not remembering how they have received and heard. Those who try to bring in theories that would remove the pillars of our faith concerning the sanctuary or concerning the personality of God or of Christ, are working as blind men. They are seeking to bring in uncertainties and to set the people of God adrift without an anchor. {MR760 9.5}

While false doctrines and dangerous errors are pressed upon the mind, it cannot be dwelling upon the truth which is to fit and prepare the house of Israel to stand in the day of the Lord. (EW 125)

Graves are opened, and “many of them that sleep in the dust of the earth. . . awake, some to everlasting life, and some to shame and everlasting contempt.” Daniel 12:2. All who have died in the faith of the third angel’s message come forth from the tomb glorified, to hear God’s covenant of peace with those who have kept His law. “They also which pierced Him” (Revelation 1:7) (GC 637.1 1911)

The voice of God is heard from heaven, declaring the day and hour of Jesus’ coming, and delivering the everlasting covenant to His people. {GC 640.2} (1911)

Soon we heard the voice of God like many waters, which gave us the day and hour of Jesus’ coming. The living saints, 144,000 in number, knew and understood the voice, while the wicked thought it was thunder and an earthquake. When God spoke the time, He poured upon us the Holy Ghost, and our faces began to light up and shine with the glory of God, as Moses’ did when he came down from Mount Sinai. {EW 14.1}

God is leading out a people to stand in perfect unity upon the platform of eternal truth. (4T 17.1)

Revelation 14:4-5 These are they which follow the Lamb whithersoever he goeth. These were redeemed from among men, being the firstfruits unto God and to the Lamb. 5 And in their mouth was found no guile: for they are without fault before the throne of God.

John 17:11 Holy Father, keep through thine own name those whom thou hast given me, that they may be one, as we are.

John 17:20 Neither pray I for these alone, but for them also which shall believe on me through their word;