Colossians – To Do Or Not To Do? 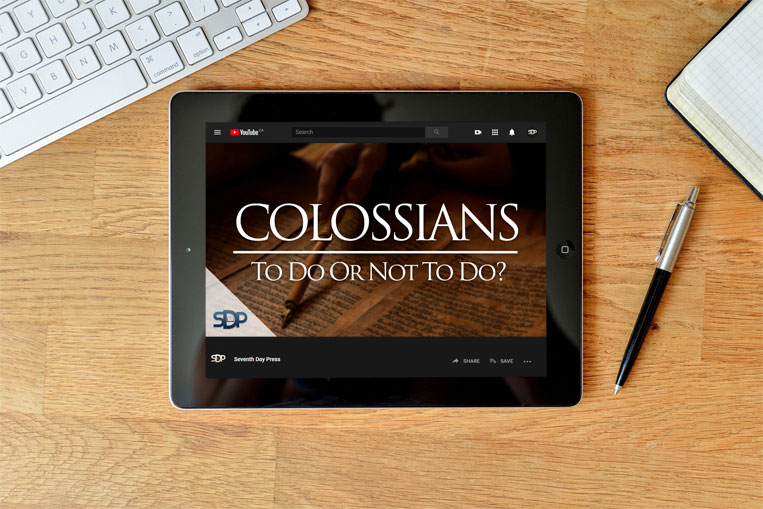 In this presentation we will take a look at Colossians 2.

Blotting out the handwriting of ordinances that was against us, which was contrary to us, and took it out of the way, nailing it to his cross; Colossians 2:14

Assumption 1 – Verse 14 = record of our sins blotted out

The truth is that the cross did NOT blot out our sins, it RECORDED our sins

Let no man therefore judge you in meat, or in drink, or in respect of an holyday, or of the new moon, or of the sabbath days: Colossians 2:16

The truth is that Paul did NOT jump subjects between verse 14 and verse 16!

B) Immediate Context of Colossians 2

For he is our peace, who hath made both one, and hath broken down the middle wall of partition between us;  (15)  Having abolished in his flesh the enmity, even the law of commandments contained in ordinances; for to make in himself of twain one new man, so making peace; Ephesians 2:14-15

ii.) 2 Chronicles 33:8  Neither will I any more remove the foot of Israel from out of the land which I have appointed for your fathers; so that they will take heed to do all that I have commanded them, according to the whole law and the statutes and the ordinances by the hand of Moses.

iv.) James 1:25  – But whoso looketh into the perfect law of liberty, and continueth therein, he being not a forgetful hearer, but a doer of the work, this man shall be blessed in his deed.
James 2:12  – So speak ye, and so do, as they that shall be judged by the law of liberty.

Two Laws:
Law of God: God’s command, written with His finger in stone, placed
inside ark, law of liberty
Law of Moses: Statutes and ordinances, hand written in a book with ink,
placed in the side of the ark, witness against you

a) Isaiah 1:12-18 Your appointed feasts, Your moons, sabbaths – My soul hates

When ye come to appear before me, who hath required this at your hand, to tread my courts?  (13)  Bring no more vain oblations; incense is an abomination unto me; the new moons and sabbaths, the calling of assemblies, I cannot away with; it is iniquity, even the solemn meeting.  (14)  Your new moons and your appointed feasts my soul hateth: they are a trouble unto me; I am weary to bear them.  (15)  And when ye spread forth your hands, I will hide mine eyes from you: yea, when ye make many prayers, I will not hear: your hands are full of blood.  (16)  Wash you, make you clean; put away the evil of your doings from before mine eyes; cease to do evil;  (17)  Learn to do well; seek judgment, relieve the oppressed, judge the fatherless, plead for the widow.  (18)  Come now, and let us reason together, saith the LORD: though your sins be as scarlet, they shall be as white as snow; though they be red like crimson, they shall be as wool. Isaiah 1:12-18

b) Hosea 2:11 Her feasts, Her moons, Her Sabbaths – He caused to cease

I will also cause all her mirth to cease, her feast days, her new moons, and her sabbaths, and all her solemn feasts. Hosea 2:11

In those days saw I in Judah some treading wine presses on the sabbath, and bringing in sheaves, and lading asses; as also wine, grapes, and figs, and all manner of burdens, which they brought into Jerusalem on the sabbath day: and I testified against them in the day wherein they sold victuals.  (16)  There dwelt men of Tyre also therein, which brought fish, and all manner of ware, and sold on the sabbath unto the children of Judah, and in Jerusalem.  (17)  Then I contended with the nobles of Judah, and said unto them, What evil thing is this that ye do, and profane the sabbath day?  (18)  Did not your fathers thus, and did not our God bring all this evil upon us, and upon this city? yet ye bring more wrath upon Israel by profaning the sabbath.  (19)  And it came to pass, that when the gates of Jerusalem began to be dark before the sabbath, I commanded that the gates should be shut, and charged that they should not be opened till after the sabbath: and some of my servants set I at the gates, that there should no burden be brought in on the sabbath day.  (20)  So the merchants and sellers of all kind of ware lodged without Jerusalem once or twice.  (21)  Then I testified against them, and said unto them, Why lodge ye about the wall? if ye do so again, I will lay hands on you. From that time forth came they no more on the sabbath.  (22)  And I commanded the Levites that they should cleanse themselves, and that they should come and keep the gates, to sanctify the sabbath day. Remember me, O my God, concerning this also, and spare me according to the greatness of thy mercy. Nehemiah 13:15-22

If thou turn away thy foot from the sabbath, from doing thy pleasure on my holy day; and call the sabbath a delight, the holy of the LORD, honourable; and shalt honour him, not doing thine own ways, nor finding thine own pleasure, nor speaking thine own words:  (14)  Then shalt thou delight thyself in the LORD; and I will cause thee to ride upon the high places of the earth, and feed thee with the heritage of Jacob thy father: for the mouth of the LORD hath spoken it. Isaiah 58:13-14

And when ye reap the harvest of your land, thou shalt not make clean riddance of the corners of thy field when thou reapest, neither shalt thou gather any gleaning of thy harvest: thou shalt leave them unto the poor, and to the stranger: I am the LORD your God. Leviticus 23:22

THE HISTORY OF THE SABBATH by J.N. ANDREWS
CHAPTER 7 The feasts, new moons & Sabbaths of the Hebrews. (Page 90)

The feasts of the Lord were to be holden in the place which the Lord should choose, namely, Jerusalem;3 and when that city, the place of their solemn assemblies, was destroyed and the people themselves carried into captivity, the complete cessation of their feasts, and, as a consequence, of the annual sabbaths, which were specified days in those feasts, must occur. The adversaries mocked at her sabbaths, by making a “noise in the house of the Lord as in the day of a solemn feast.” But the observance of the Lord’s Sabbath did not cease with the dispersion of the Hebrews from their own land; for it was not a local institution, like the annual sabbaths. Its violation was
one chief cause of the Babylonish captivity; and their final restoration to their own land was made conditional upon their observing it in their dispersion.

The feasts, new moons, and annual sabbaths, were restored when the Hebrews returned from captivity, and with some interruptions, were kept up until the final destruction of their city and nation by the Romans. But ere the providence of God thus struck out of existence these Jewish festivals, the whole typical system was abolished, having reached the commencement of its antitype, when our Lord Jesus Christ expired upon the cross. The handwriting of ordinances being thus abolished, no one is to be judged respecting its meats, or drinks, or holy days, or new moons,
or sabbaths, “which are a shadow of things to come; but the body is of Christ.” But the Sabbath of the Lord did not form a part of this handwriting of ordinances; for it was instituted before sin had entered the world, and consequently before there was any shadow of redemption; it was written by the finger of God, not in the midst of types and shadows, but in the bosom of the moral law; and the day following that on which the typical sabbaths were nailed to the cross, the Sabbath commandment of the moral law is expressly recognized. Moreover, when the Jewish festivals were utterly extinguished with the final destruction of Jerusalem, even then was the
Sabbath of the Lord brought to the minds of his people.

Thus have we traced the annual sabbaths until their final cessation, as predicted by Hosea. It remains that we trace the Sabbath of the Lord until we reach the endless ages of the new earth, when we shall find the whole multitude of the redeemed assembling before God for worship on each successive Sabbath.”

For as many as are of the works of the law are under the curse: for it is written, Cursed is every one that continueth not in all things which are written in the book of the law to do them. Galatians 3:10

And this I say, that the covenant, that was confirmed before of God in Christ, the law, which was four hundred and thirty years after, cannot disannul, that it should make the promise of none effect. Galatians 3:17

3) Galatians 3:19 law added because of transgressions, ordained by angels in hand of
mediator

Wherefore then serveth the law? It was added because of transgressions, till the seed should come to whom the promise was made; and it was ordained by angels in the hand of a mediator. Galatians 3:19

For example page 383 of Acts of the Apostles says:

While tarrying at Corinth, Paul had cause for serious apprehension concerning some of the churches already established. Through the influence of false teachers who had arisen among the believers in Jerusalem, division, heresy, and sensualism were rapidly gaining ground among the believers in Galatia. These false teachers were mingling Jewish traditions with the truths of the gospel. Ignoring the decision of the general council at Jerusalem, they urged upon the Gentile converts the observance of the ceremonial law. { AA 383.1}

The situation was critical. The evils that had been introduced threatened speedily to destroy the Galatian churches. { AA 383.2}

Paul was cut to the heart, and his soul was stirred by this open apostasy on the part of those to whom he had faithfully taught the principles of the gospel. He immediately wrote to the deluded believers, exposing the false theories that they had accepted and with great severity rebuking those who were departing from the faith. After saluting the Galatians in the words, “Grace be to you and peace from God the Father, and from our Lord Jesus Christ,” he addressed to them these words of sharp reproof: { AA 383.3}

On page 387 of Acts of the Apostles it says:

Today, as then, there are false spiritual guides, to whose doctrines many listen eagerly. It is Satan’s studied effort to divert minds from the hope of salvation through faith in Christ and obedience to the law of God. In every age the archenemy adapts his temptations to the prejudices or inclinations of those whom he is seeking to deceive. In apostolic times he led the Jews to exalt the ceremonial law and reject Christ;… { AA 387.1}

1) Colossians 2:17 shadow ends when it meets the body that casts it
2) Galatians 3:19 till the seed should come
3) Galatians 4:4 fullness of time was come
4) Hebrews 9:10 until the time of reformation

May we stand on the firm foundation of the Word of God.