Controversy from the Beginning 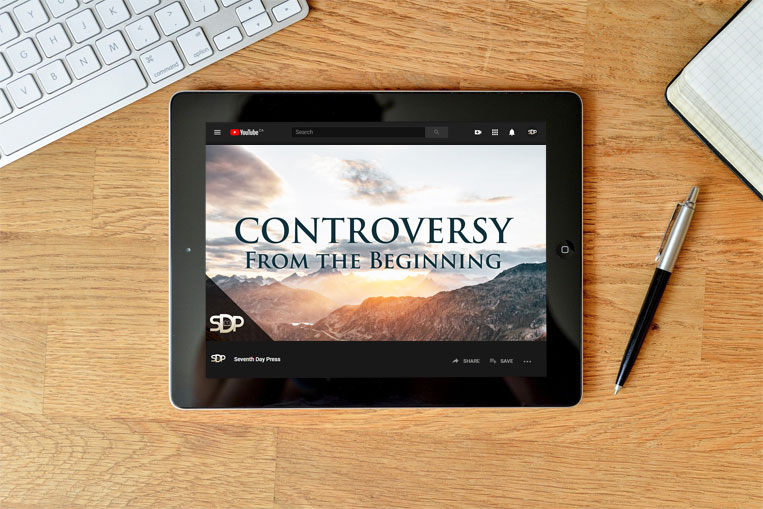 The Rejection of Christ’s Divinity.

Titus 2:13  “Looking for that blessed hope, and the glorious appearing of the great God and our Saviour Jesus Christ”

The coming of the Lord has been in all ages the hope of His true followers. The Saviour’s parting promise upon Olivet, that He would come again, lighted up the future for His disciples, filling their hearts with joy and hope that sorrow could not quench nor trials dim. Amid suffering and persecution, the “appearing of the great God and our Saviour Jesus Christ” was the “blessed hope.” When the Thessalonian Christians were filled with grief as they buried their loved ones, who had hoped to live to witness the coming of the Lord, Paul, their teacher, pointed them to the resurrection, to take place at the Saviour’s advent. Then the dead in Christ should rise, and together with the living be caught up to meet the Lord in the air. “And so,” he said, “shall we ever be with the Lord. Wherefore comfort one another with these words.” 1 Thessalonians 4:16-18. { GC 302.2}

His brethren often brought forward the philosophy of the Pharisees, which was hoary with age and threadbare, and presumed to think that they could teach Him who understood all truth and comprehended all mysteries. He was the Author of truth, and His soul was wearied and distressed. He found relief in being alone, and in communing with His Heavenly Father. His brethren thought their wisdom was far superior to that of Jesus, and did not apprehend that He was the fountain of all wisdom and knowledge. They freely condemned that which they could not understand, and their reproaches probed Him to the quick, they avowed faith in God, and thought they were vindicating God, when God was with them in the flesh, and they knew Him not. These things made His path a thorny one to travel. {PrT February 14, 1895, par. 6}

“I lay down My life, that I might take it again. No man taketh it from Me, but I lay it down of Myself. I have power to lay it down, and I have power to take it again.” While as a member of the human family He was mortal, as God He was the fountain of life for the world. He could have withstood the advances of death, and refused to come under its dominion; but voluntarily He laid down His life, that He might bring life and immortality to light. He bore the sin of the world, endured its curse, yielded up His life as a sacrifice, that men might not eternally die. “Surely He hath borne our griefs, and carried our sorrows…. He was wounded for our transgressions, He was bruised for our iniquities: the chastisement of our peace was upon Him; and with His stripes we are healed. All we like sheep have gone astray; we have turned every one to his own way; and the Lord hath laid on Him the iniquity of us all.” Isaiah 53:4-6. {DA 484.1}

1. This statement said “as God” but the next statement, which is very similar, says “as a God”.

Contrast this with the riches of glory, the wealth of praise pouring forth from immortal tongues, the millions of rich voices in the universe of God in anthems of adoration. But he humbled himself, and took mortality upon him. As a member of the human family he was mortal, but as a God he was the fountain of life to the world. He could, in his divine person, ever have withstood the advances of death, and refused to come under its dominion; but he voluntarily laid down his life, that in so doing he might give life and bring immortality to light. He bore the sins of the world, and endured the penalty which rolled like a mountain upon his divine soul. He yielded up his life a sacrifice, that man should not eternally die. He died, not through being compelled to die, but by his own free will. This was humility. The whole treasure of heaven was poured out in one gift to save fallen man. He brought into his human nature all the life-giving energies that human beings will need and must receive. {RH July 5, 1887, par. 5}

But although Christ’s divine glory was for a time veiled and eclipsed by His assuming humanity, yet He did not cease to be God when He became man. The human did not take the place of the divine, nor the divine of the human. This is the mystery of godliness. The two expressions human and divine were, in Christ, closely and inseparably one, and yet they had a distinct individuality. Though Christ humbled Himself to become man, the Godhead was still His own. His Deity could not be lost while He stood faithful and true to His loyalty. Surrounded with sorrow, suffering, and moral pollution, despised and rejected by the people to whom had been intrusted the oracles of heaven, Jesus could yet speak of Himself as the Son of man in heaven. He was ready to take once more His divine glory when His work on earth was done. {ST May 10, 1899, par. 11}

There were occasions when Jesus stood forth while in human flesh as the Son of God. Divinity flashed through humanity, and was seen by the scoffing priests and rulers. Was it acknowledged? Some acknowledged that He was the Christ, but the larger portion of those who upon these special occasions were forced to see that He was the Son of God, refused to receive Him. Their blindness corresponded to their determined resistance of conviction. {ST May 10, 1899, par. 12}

1. Jesus Christ is truly “God in infinity.” Jesus is God unlimited but not God in personality, or in other words, He is not the Father.  They are two distinct individual Beings

The Controversy in the Beginning

And coveting the glory with which the infinite Father had invested His Son, this prince of angels aspired to power that was the prerogative of Christ alone. {PP 35.2}

1. Notice here that it says Lucifer wanted the POWER that was the prerogative of Christ alone.

With an appearance of deep interest in the well-being of their friends on earth, they [demons impersonating the dead] insinuate the most dangerous errors. The fact that they state some truths, and are able at times to foretell future events, gives to their statements an appearance of reliability; and their false teachings are accepted by the multitudes as readily, and believed as implicitly, as if they were the most sacred truths of the Bible. The law of God is set aside, the Spirit of grace despised, the blood of the covenant counted an unholy thing. The spirits deny the divinity of Christ, and place even the Creator on a level with themselves. Thus under a new disguise the great rebel still carries forward his warfare against God, begun in Heaven, and for nearly six thousand years continued upon the earth. {GC88 552.2}

1. The devil was telling the other angels that Jesus was no different then himself so why would he (Lucifer) not have the same homage?

“To dispute the supremacy of the Son of God, thus impeaching the wisdom and love of the Creator, had become the purpose of this prince of angels”  {PP 36.1}

1. The work the devil has been doing since day one is to lower Jesus to his own level.

“The King of the universe summoned the heavenly hosts before Him, that in their presence He might set forth the true position of His Son and show the relation He sustained to all created beings. The Son of God shared the Father’s throne, and the glory of the eternal, self-existent One encircled both. About the throne gathered the holy angels, a vast, unnumbered throng—“ten thousand times ten thousand, and thousands of thousands” (Revelation 5:11.), the most exalted angels, as ministers and subjects, rejoicing in the light that fell upon them from the presence of the Deity. Before the assembled inhabitants of heaven the King declared that none but Christ, the Only Begotten of God, could fully enter into His purposes, and to Him it was committed to execute the mighty counsels of His will. The Son of God had wrought the Father’s will in the creation of all the hosts of heaven; and to Him, as well as to God, their homage and allegiance were due. Christ was still to exercise divine power, in the creation of the earth and its inhabitants. But in all this He would not seek power or exaltation for Himself contrary to God’s plan, but would exalt the Father’s glory and execute His purposes of beneficence and love.” {PP 36.2}

“[Lucifer] was beloved and reverenced by the heavenly host, angels delighted to execute his commands, and he was clothed with wisdom and glory above them all. Yet the Son of God was exalted above him, as one in power and authority with the Father.”  {PP 36.3}

“There was contention among the angels. Satan and his sympathizers were striving to reform the government of God. They wished to look into His unsearchable wisdom, and ascertain His purpose in exalting Jesus and endowing Him with such unlimited power and command.”  {EW 145.2}

“The exaltation of the Son of God as equal with the Father was represented as an injustice to Lucifer, who, it was claimed, was also entitled to reverence and honor.”  {PP 37.1}

“There had been no change in the position or authority of Christ. Lucifer’s envy and misrepresentation and his claims to equality with Christ had made necessary a statement of the true position of the Son of God; but this had been the same from the beginning. Many of the angels were, however, blinded by Lucifer’s deceptions.” {PP 38.1}

“There were some who looked with favor upon Lucifer’s insinuations against the government of God. Although they had heretofore been in perfect harmony with the order which God had established, they were now discontented and unhappy because they could not penetrate His unsearchable counsels; they were dissatisfied with His purpose in exalting Christ. These stood ready to second Lucifer’s demand for equal authority with the Son of God.”  {PP 38.3}

“Flattered by the favor with which his advances were received, he hoped to win all the angels to his side, to become equal with God Himself, and to be obeyed by the entire host of heaven.” {PP 40.1}

With an appearance of deep interest in the well-being of their friends on earth, they [demons impersonating the dead] insinuate the most dangerous errors. The fact that they state some truths, and are able at times to foretell future events, gives to their statements an appearance of reliability; and their false teachings are accepted by the multitudes as readily, and believed as implicitly, as if they were the most sacred truths of the Bible. The law of God is set aside, the Spirit of grace despised, the blood of the covenant counted an unholy thing. The spirits deny the divinity of Christ, and place even the Creator on a level with themselves. Thus under a new disguise the great rebel still carries forward his warfare against God, begun in Heaven, and for nearly six thousand years continued upon the earth. {GC88 552.2}

The idea that Jesus has limited power is not a new concept. This is a concept that Lucifer brought forth in the very beginning. It is at the very core of the great controversy. May we find ourselves on the right side of the controversy. May we accept Jesus as having unlimted power and authority.