Genesis 1 and the Flat Earth 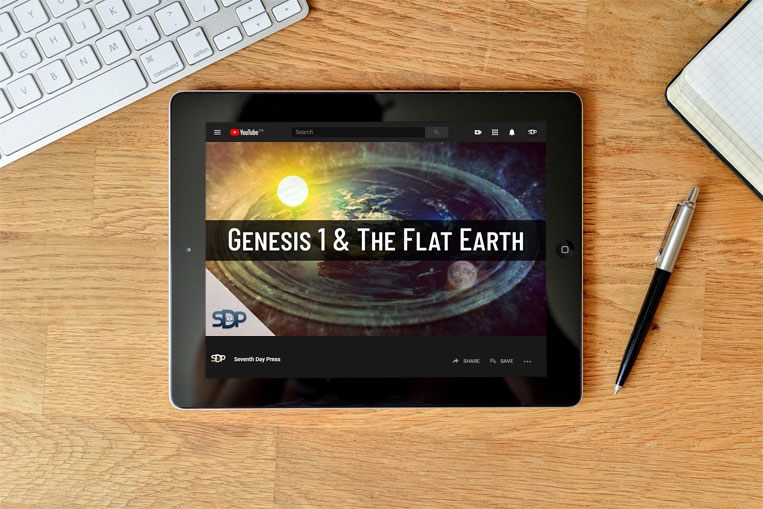 The only reason why we are talking about this today is not because I have a burden to convince people in believing in a globe earth or in a heliocentric model, but rather because some people from different faiths around the world, are actively closing the door to evangelism, by promoting ideas that were widely found in the dark ages, and become the ridicule of the world. They are misinterpreting the Bible and making the false claim that the Bible teaches something that is not there, and that is the flat earth theory. Moreover, they are accusing those who do not buy into these false interpretations of not basing their faith on the Bible.

God’s burden in the Bible isn’t centred around the shape of the earth, but the savings of souls from sin.

The four points we will look at today:

EXPANSE, noun expans’. [Latin expansum.] A spreading; extend; a wide extent of space or body; as the expanse of heaven; The smooth expanse of crystal lakes.

Praise ye the LORD. Praise God in his sanctuary: praise him in the firmament H7549 of his power. Psalm 105:1

Why are heaven and firmament connected with each other in Genesis 1?

Space/Expanse/firmament can be seen in different areas. But when you call it heaven, as God did, then you are talking a very particular space – the heaven. In other words, every heaven is a particular kind of firmament, a particul expanse or space. So now that we have examined the relatioshiup between these words let’s go back to Genesis 1 and take everything into account, not ignoring what the Bible states.

2. Validation of the understanding (Pioneers)

We believe the Bible recognizes three heavens all existing in the present constitution of things; namely, the first heaven which the fowls of the air inhabit, the second, the region of the sun, moon, and stars, and the third, high above them all, where paradise and the tree of life are found, where God has his residence and his throne, to which Paul was caught up in heavenly vision, to which Christ ascended when he left the earth, where he now shares the throne of his Father as priest-king, and where the glorious city stands awaiting the saints when they enter into life. {JSW, ARSH January 20, 1863, p. 60.2}

Moses says, “God made the firmament and divided the waters which were under the firmament from the waters which were above the firmament. And God called the firmament Heaven. Genesis 1:7, 8. In the 20th v. says, “let the waters bring forth them that have life, and fowls that may fly above the Earth in the open firmament of Heaven.” Here we have it explained that every where above the earth and waters, is called the firmament, and the firmament is called Heaven. Then God’s living people live in the first Heaven, heavenly places in Christ. Ephesians 1:3, 20, and 2:6; Hebrews 12:22. See 2nd Peter 3rd chap.5,7,10-12. David in 19 Psl, 1st v. speaks of the starry Heaven, second above the first. Paul says, Paradise, that is the Heavenly Jerusalem, is in the third Heaven, which is the sanctuary. The Prophet says “he hath looked down from the height of his sanctuary; from Heaven did the Lord behold the earth. Solomon says the Heaven of Heavens. {BP2 66.3}

August 30th, 1846 I was married to Elder James White. In a few months we attended a conference in Topsham, Me. Bro. J. Bates was present. He did not then fully believe that my visions were of God. It was a meeting of much interest. But I was suddenly taken ill and fainted. The brethren prayed for me, and I was restored to consciousness. The Spirit of God rested upon us in Bro. C.’s humble dwelling, and I was wrapt in a vision of God’s glory, and for the first time had a view of other planets. After I came out of vision I related what I had seen. Bro. Bates asked if I had studied astronomy. I told him I had no recollection of ever looking into an astronomy. Said he, “This is of the Lord.” I never saw Bro. Bates so free and happy before. His countenance shone with the light of Heaven, and he exhorted the church with power. {2SG 83.1}

In the previous year, April 19, 1845, the Illustrated London News had published something of great interest to astronomers from Lord Rosse, respecting the wonderful discoveries he had made through his monster telescope, especially a view of what astronomers call “the gap in the sky.” One evening, at the conference above mentioned, at the house of Mr. Curtiss and in the presence of Elder Bates, who was yet undecided in regard to these manifestations, Mrs. White, while in vision, began to talk about the stars, giving a glowing description of rosy-tinted belts which she saw across the surface of some planet, and added, “I see four moons.” “Oh,” said Elder Bates, “she is viewing Jupiter!” Then having made motions as though traveling through space, she began giving a description of belts and rings in their ever-varying beauty, and said, “I see seven moons.” 7 Elder Bates exclaimed, “She is describing Saturn.” Next she said, “I see six moons,” and at once began a description of the “opening heavens,” with its glory, calling it an opening into a region more enlightened. Elder Bates said that her description far surpassed any account of the opening heavens he had ever read from any author. {GSAM 258.1}

While she was talking and still in vision, he arose to his feet, and exclaimed, “O how I wish Lord John Rosse was here to-night!” Elder White inquired, “Who is Lord John Rosse?” “Oh,” said Elder Bates, “he is the great English astronomer. I wish he was here to hear that woman talk astronomy, and to hear that description of the ‘opening heavens.’ It is ahead of anything I ever read on the subject.” From that evening Elder Bates became fully satisfied that the visions of Mrs. White were outside of her knowledge and control. This and the character of the reproof and instruction given, satisfied him that they were from God. {GSAM 258.2}

4. The Flat Earth and the Dark Ages

It was by believing that the earth is round, against the dogma of the Catholic Church that it is flat, that Columbus ever discovered Cuba and the western continent. Of course every American schoolboy knows that before Columbia discovered America the Catholic Church insisted that the earth was flat. But it is too sadly true that along with this the impression is left, if not actually inculcated, upon the minds of the school-children that at that time all the world supposed the earth to be flat. But that is a great mistake. All except the Catholic world knew then that the earth is round. The ancients knew that the earth is round. The Jews knew it always. Aristotle taught it; so did Ptolemy the Geographer. Indeed, this was a familiar truth among the people of those times. It was the church fathers who, with the many other falsehoods of the great apostasy, brought in the dogma that the earth should be flat. The chief of the church fathers, and the chief author of the dogma that the earth was flat, was Augustine—the father also of the Inquisition—tho in point of time Lactantius preceded him in advocating the dogma. {ATJ, SITI January 11, 1899, p. 1.3-6}

On April 12, 1633, chief inquisitor Father Vincenzo Maculani da Firenzuola, appointed by Pope Urban VIII, begins the inquisition of physicist and astronomer Galileo Galilei. Galileo was ordered to turn himself in to the Holy Office to begin trial for holding the belief that the Earth revolves around the sun, which was deemed heretical by the Catholic Church. https://www.history.com/this-day-in-history/galileo-is-accused-of-heresy