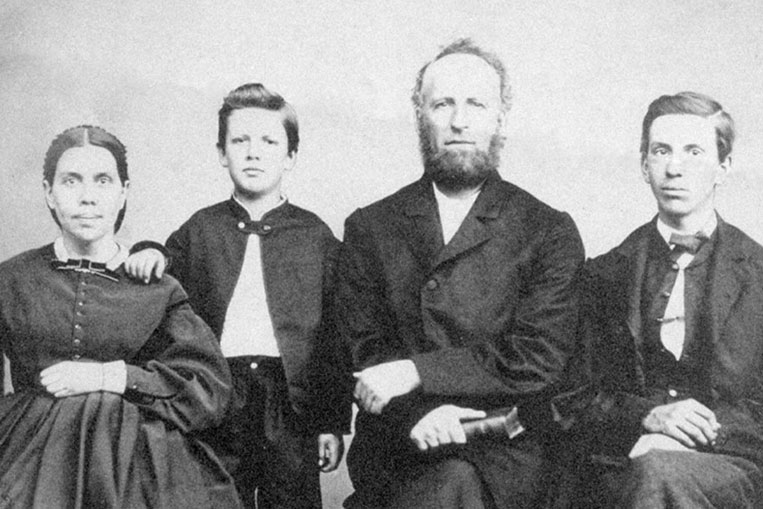 James White was born on August 4, 1821, the middle child of nine. He had an illness before the age of three that left him physically feeble with poor eyesight. His eyes would cross when he tried to read, which made schooling impractical (“By Saddle and Sleigh: A Story of James White’s Youth, Margaret Rossiter Thiele, pg. 34). He worked on his father’s farm until he was 19. During that time, he grew to be six feet tall and exceptionally strong. Around the age of 18, his vision normalized. At 19, he entered first grade and in 12 weeks earned the equivalent of an eighth grade diploma. (“James White”, Virgil Robinson, 16-17). He later spent 29 weeks in high school. In the fall of 1840, he became the teacher of a country school.

Before James’s eyesight cleared up, restoring his potential “to become a man,” he confessed that he had viewed himself as “nearly worthless in the world,” and “regretted” his “existence” (Life Incidents, 13).

Shortly after, he met Ellen Harmon and became convinced that her visions were from God. James offered his horse and sleigh for transportation, and also volunteered to arrange and organize her meetings. For three months they traveled, holding meetings “almost everyday.” Thus they “visited most of the Advent bands in Maine and eastern New Hampshire” (1 Bio 74-75).
Said Mrs. White: “As for marriage, we never thought of it, because we thought the Lord would come very soon” (1 Bio 84).

The public saw Ellen as the revivalist and James as the organizer. “As man and wife they were a unique and strong gospel team. Their method and division of the work were perfect. Adventists have never had their equal” (MOL 53.1)

“It was not over a year before James White talked it over with me. He said something had come up, and he should have to go away and leave me to go with whomsoever I would, or we must be married. He said something had got to be done. So we were married, and have been married ever since. Although he is dead, I feel that he is the best man that ever trod shoe leather” (Ellen White, 3 MOL 52.5, large print).

James White was a talented and capable executive, missionary leader, and powerful public evangelist.
Not only did he participate with William Miller, Joseph Bates, and scores of other preachers in announcing the advent of our Lord near in the 1840’s, but he outlived the Millerite movement to become the first great apostle of the Seventh-day Adventist cause. James White died August 6, 1881, when he was only sixty. He literally worked himself to death. The brethren leaned on him so heavily that his towering figure fell. His sixty years of life were spent unselfishly and sacrificially (“James White,” Adventist Pioneer Library, “https://www.aplib.org/james-s-white/”).