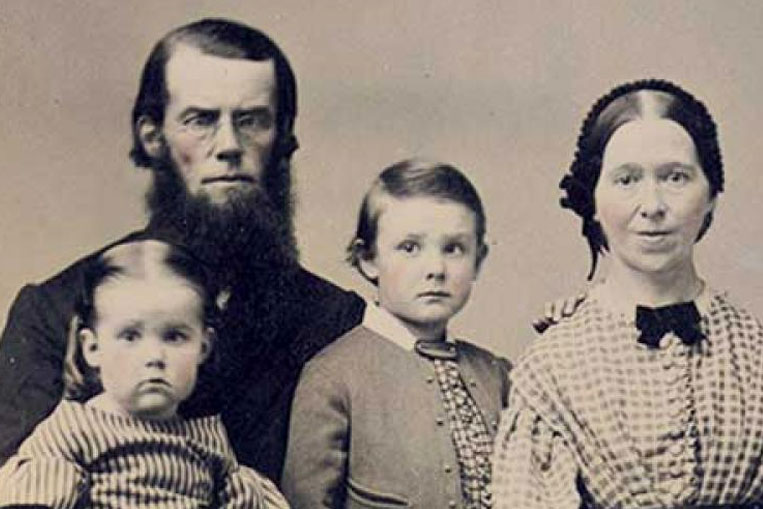 JN Andrews was born in Poland, Maine in 1829. He was convinced in early youth that Jesus was returning soon and was a part of the Millerite movement. Just prior, at the age of 11, he had quit school. Thus, he was largely self-taught, and with great success. It is reported that later in life he was fluent in seven languages and could recite the New Testament by memory.

His uncle Charles, a member of the U.S. Congress, offered to pay for his training as a lawyer so he could follow a political career. However, early in 1845, at age 15, after reading a tract written by T. M. Preble, John accepted the Sabbath — a decision that changed the direction of his life. He embraced this new truth and thereafter devoted his entire time and talents to the Seventh-day Adventist movement.

Andrews had a long and productive association both with the church and with James and Ellen White. His name first appeared in Adventist literature when he was 20 years of age. When the first Adventist press was set up in Rochester, New York, in 1852, he became a member of the publishing committee of three, at age 22. The other two members were Joseph Bates and James White. The next year, Andrews was ordained to the Adventist ministry. By this time, 35 of his articles had been published in the Review. In 1855, at James White’s request, he wrote a paper using Bible proofs, which settled sunset as the time for beginning the Sabbath. Ellen White had a vision supporting his conclusions.

Later that year, in poor health and discouraged, Andrews left the ministry and settled in Waukon, Iowa. There, one year later, in 1856, he would marry his wife, Angeline Stevens. Interestingly, JN Andrews and Uriah Smith married sisters. In 1857, Smith would marry Angeline’s sister Harriet Stevens.

James and Ellen White traveled to Iowa to persuade Andrews to return to ministry, which he did. In 1858, he led out in a study of systematic benevolence, the forerunner of the church’s tithing plan. In 1859, he published the first of several editions of History of the Sabbath. In 1864 he was sent to Washington, D.C., in a successful effort to secure noncombatancy status for Adventists during the Civil War. He was elected as the third president of the General Conference in 1867, following John Byington and James White. When the first Seventh-day Adventist camp meeting was held in Wright, Michigan, in 1868, he showed his personal side as he went around to the tents at the end of the day, asking: “Are you all comfortable for the night?” He is described as tall and distinguished-looking in appearance, with warm blue eyes, rimless glasses, thick but neatly trimmed beard, and bearing himself with erect dignity. He made a good first impression on people. Always curious and well informed, his wide interests and warm demeanour made him an easy conversationalist.

JN Andrews and Angeline had two children and then two more, the latter dying in infancy from tuberculosis. In 1872, Angeline died from a stroke.

Still grieving the death of his wife Angeline Andrews accepted the call to be the first missionary of the Seventh-day Adventist Church in 1874 and departed to Switzerland as a 45-year-old single parent, accompanied by his two surviving children, Charles, 16, and Mary, 12. The children proved to be extraordinary young pioneers, editing, translating, setting type, helping tirelessly to establish the international missionary journal, Les Signes des Temps (The Signs of the Times). Ellen White wrote to church leaders in Europe: “We sent you the ablest man in our ranks” (Manuscript Releases, volume 5, page 436).

In 1878, his daughter Mary contracted tuberculosis and died soon after arriving for treatment at the Battle Creek Sanitarium. John continued his work as a missionary in Europe, dying there in 1883 of tuberculosis. He was 54. He is buried in Basel, Switzerland, where he had established the Adventist press.
Recognized as the foremost intellectual in the early Adventist movement, Andrews made significant contributions to the development of several doctrines, notably the Sabbath, tithing, sleep of the dead, church organization, and the noncombatant status of military draftees.

It was to memorialize his commitment to scholarship and to the worldwide mission of the Seventh-day Adventist church that one of the most important Adventist universities worldwide was named after him — Andrews University in Berrien Springs, Michigan.