The Equality of Christ 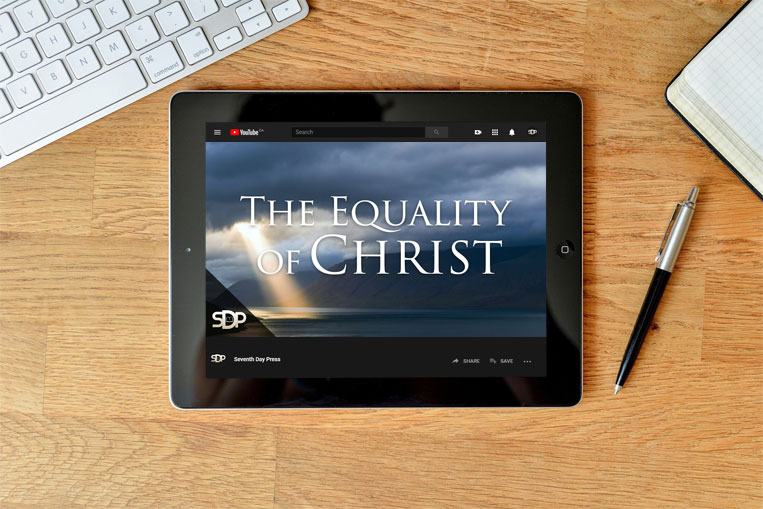 We are going to be talking about the divine nature of Christ and specifically the equality of Christ. We will look at this topic through the following three witnesses.

We will be looking at omnipotence, omniscience and omnipresence.

Question: What does omnipotent mean?
Answer: “Omni” means “all” and “potent” means “power.” The Father has within him “all power.”

1 John 3:20  For if our heart condemn us, God is greater than our heart, and knoweth all things.

Question: What does omniscience mean?
Answer: “Omni” means “all” and “science” means “knowing. The Father is “all knowing.”

Question: What does omnipresence mean?
Answer: “Omni” means “all” and “presence” meaning “present. The Father is “everywhere present.”

Omnipotent, omniscience and omnipresence are natural to God. These are part of His very nature. God doesn’t have to develop them.

We will now look at the equality of Christ.

John 17:3  And this is life eternal, that they might know thee the only true God, and Jesus Christ, whom thou hast sent.

Hebrews 1:3  Who being the brightness of his glory, and the express image of his person, and upholding all things by the word of his power, when he had by himself purged our sins, sat down on the right hand of the Majesty on high;

The Son of God – Omnipresence

Matthew 28:16-20  Then the eleven disciples went away into Galilee, into a mountain where Jesus had appointed them.  (17)  And when they saw him, they worshipped him: but some doubted.  (18)  And Jesus came and spake unto them, saying, All power is given unto me in heaven and in earth.  (19)  Go ye therefore, and teach all nations, baptizing them in the name of the Father, and of the Son, and of the Holy Ghost:  (20)  Teaching them to observe all things whatsoever I have commanded you: and, lo, I am with you alway, even unto the end of the world. Amen.

Matthew 18:20  For where two or three are gathered together in my name, there am I in the midst of them.

The Son of God – Omnipotent

Colossians 1:17  And he is before all things, and by him all things consist.

Hebrews 1:1-4  God, who at sundry times and in divers manners spake in time past unto the fathers by the prophets,  (2)  Hath in these last days spoken unto us by his Son, whom he hath appointed heir of all things, by whom also he made the worlds;  (3)  Who being the brightness of his glory, and the express image of his person, and upholding all things by the word of his power, when he had by himself purged our sins, sat down on the right hand of the Majesty on high;  (4)  Being made so much better than the angels, as he hath by inheritance obtained a more excellent name than they.

When Satan and the Son of God first met in conflict, Christ was the commander of the heavenly hosts; and Satan, the leader of revolt in heaven, was cast out. Now their condition is apparently reversed, and Satan makes the most of his supposed advantage. One of the most powerful of the angels, he says, has been banished from heaven. The appearance of Jesus indicates that He is that fallen angel, forsaken by God, and deserted by man. A divine being would be able to sustain his claim by working a miracle; “if Thou be the Son of God, command this stone that it be made bread.” Such an act of creative power, urges the tempter, would be conclusive evidence of divinity. It would bring the controversy to an end. { DA 119.2}

Not without a struggle could Jesus listen in silence to the arch-deceiver. But the Son of God was not to prove His divinity to Satan, or to explain the reason of His humiliation. By conceding to the demands of the rebel, nothing for the good of man or the glory of God would be gained. Had Christ complied with the suggestion of the enemy, Satan would still have said, Show me a sign that I may believe you to be the Son of God. Evidence would have been worthless to break the power of rebellion in his heart. And Christ was not to exercise divine power for His own benefit. He had come to bear trial as we must do, leaving us an example of faith and submission. Neither here nor at any subsequent time in His earthly life did He work a miracle in His own behalf. His wonderful works were all for the good of others. Though Jesus recognized Satan from the beginning, He was not provoked to enter into controversy with him. Strengthened with the memory of the voice from heaven, He rested in His Father’s love. He would not parley with temptation. { DA 119.3}

Satan led the cruel mob in their abuse of the Saviour. It was his purpose to provoke him to retaliation, if possible, or to drive him to perform a miracle to release himself, and thus break up the plan of salvation. One stain upon his human life, one failure of his humanity to bear the terrible test, and the Lamb of God would have been an imperfect offering, and the redemption of man a failure. But he who by a command could bring the heavenly host to his aid, he who could have driven that mob in terror from his sight by one look of divinity, submitted to the coarsest insult and outrage with dignified composure. The crown of thorns encircling his brow was the symbol of his anointing as the great High Priest. { YI February 8, 1900, par. 7 }

This wonderful problem—how God could be just, and yet the justifier of sinners—is beyond human ken. As we attempt to fathom it, it broadens and deepens beyond our comprehension. When we look with the eye of faith upon the cross of Calvary, and see our sins laid upon the victim hanging in weakness and ignominy there,—when we grasp the fact that this is God, the everlasting Father, the Prince of Peace,—we are led to exclaim, “Behold, what manner of love the Father hath bestowed upon us!” Christ could at any moment have called legions of angels to his side; he could have swept every sinner from the face of the earth, and created new beings by his power; but God so loved the world, degraded as it was by sin, that “he gave his only begotten Son, that whosoever believeth on him should not perish, but have everlasting life.” { YI February 11, 1897, par. 3 }

The Son of God – Omniscient

Colossians 2:3  In whom are hid all the treasures of wisdom and knowledge.

Christ Himself is the pearl of great price. In Him is gathered all the glory of the Father, the fullness of the Godhead. He is the brightness of the Father’s glory and the express image of His person. The glory of the attributes of God is expressed in His character. Every page of the Holy Scriptures shines with His light. The righteousness of Christ, as a pure, white pearl, has no defect, no stain. No work of man can improve the great and precious gift of God. It is without a flaw. In Christ are “hid all the treasures of wisdom and knowledge.” Colossians 2:3. He is “made unto us wisdom, and righteousness, and sanctification, and redemption.” 1 Corinthians 1:30. All that can satisfy the needs and longings of the human soul, for this world and for the world to come, is found in Christ. Our Redeemer is the pearl so precious that in comparison all things else may be accounted loss. { COL 115.1}

Jesus has omnipresence, omnipotence and omniscience just as the Father does.

Colossians 2:8-10  Beware lest any man spoil you through philosophy and vain deceit, after the tradition of men, after the rudiments of the world, and not after Christ.  (9)  For in him dwelleth all the fulness of the Godhead bodily.  (10)  And ye are complete in him, which is the head of all principality and power:

Jesus has all the fullness of the Godhead bodily. In other words, that which is the Father’s by nature is also his by nature because he inherited it from his father. Jesus didn’t have to develop these things. It’s his naturally.

The greatness of God cannot be measured or comprehended. And that doctrine that denies the absolute Godhead of Jesus Christ, denies also the Godhead of the Father; for no man knoweth the Son but the Father. { ST June 27, 1895, par. 3 }

Indeed, the fact that Christ is a part of the Godhead, possessing all the attributes of Divinity, being the equal of the Father in all respects, as Creator and Lawgiver, is the only force there is in the atonement. It is this alone which makes redemption a possibility. Christ died “that he might bring us to God” (1 Peter 3:18), but if He lacked one iota of being equal to God, He could not bring us to Him. Divinity means having the attributes of Deity. If Christ were not Divine, then we should have only a human sacrifice. {1890 E.J. Waggoner, CHR 43.2}

Jacob’s ladder touched earth and it also touched heaven. This ladder is representative of Jesus. What touched earth? The humanity of Christ. What touches heaven? The divinity of Christ. Jesus is not a half ladder. Jesus is not 50% divine and 50% human because that ladder would not have reached heaven or earth if that were the case. Jesus is 100% human therefore the ladder touches all the way to the earth. Jesus is 100% God, he’s 100% divine, so that ladder reaches all the way to heaven. There are a lot of things going on that are trying to cut the ladder short from reaching the earth by denying his humanity as being like our humanity. The devils understands that if you cut the ladder short we cannot reach it. We cannot reach Adam’s state, his natural state. And so if we say that Jesus humanity was like Adam’s before the fall then we’ve put that ladder out of reach for us. At the same time the devil is also trying to cut that ladder short from reaching all the way to heaven by limiting Jesus’ divinity or lowering that divinity down. If Jesus is not as divine as the Father then that ladder does not reach heaven. If that ladder does not reach heaven or if that ladder does not reach earth, the atonement is done and there is nothing there. This is why Waggoner says it “is the only force there is in the atonement.”

And, finally, we have the inspired words of the apostle Paul concerning Jesus Christ, that “it pleased the Father that in Him should all fullness dwell.” Col. 1:19. What this fullness is which dwells in Christ, we learn from the next chapter, where we are told that “in him dwelleth all the fullness of the Godhead bodily.” Col. 2:9. This is most absolute and unequivocal testimony to the fact that Christ possesses by nature all the attributes of Divinity. The fact of the Divinity of Christ will also appear very distinctly as we proceed to consider: {1890 E.J. Waggoner, CHR 15.3}

The inexplicable trinity that makes the godhead three in one and one in three, is bad enough; but that ultra Unitarianism that makes Christ inferior to the Father is worse. Did God say to an inferior, “Let us make man in our image? (James White, Review and Herald 29th November 1877, ‘Christ Equal with God’)

We have not as much sympathy with Unitarians that deny the divinity of Christ, as with Trinitarians who hold that the Son is the eternal Father, and talk so mistily about the three-one God. Give the Master all that divinity with which the Holy Scriptures clothe him. (James White, Review and Herald, June 6th 1871, ‘Western Tour’)

The Father was greater than the Son in that he was first. (James White, Review and Herald, January 4, 1881)