The Mystery of Godliness – Christ on Earth and His Natures 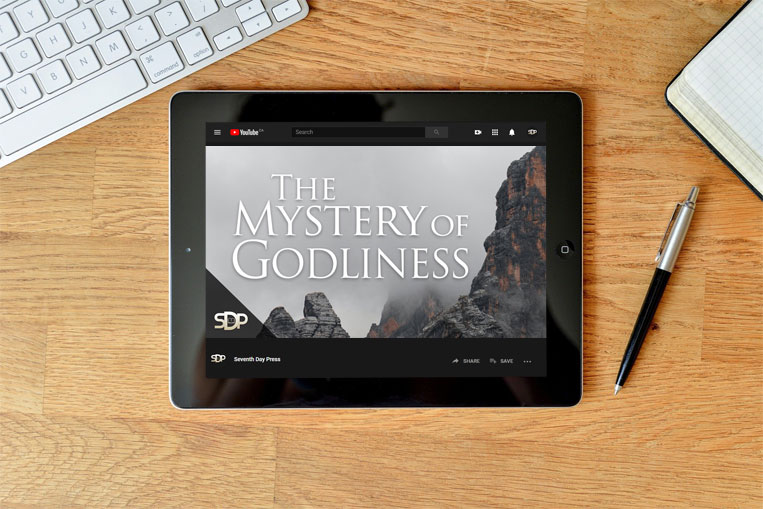 Jesus is an express image of the Father’s person and can rightfully be called the Son of God, for He himself is God in nature. Divinity or the divine nature has certain attributes, and as being fully divine, having the fulness of the Godhead in Himself, Christ received as an inheritance and possesses in Himself all the attributes of deity.

Christ is the source of all power and life (John 5:26). We are dealing with the Foundation of the Third Angel’s Message.

The Mystery of Godliness

And without controversy great is the mystery of godliness: God was manifest in the flesh, justified in the Spirit, seen of angels, preached unto the Gentiles, believed on in the world, received up into glory. 1 Timothy 3:16

“But although Christ’s divine glory was for a time veiled and eclipsed by His assuming humanity, yet He did not cease to be God when He became man. The human did not take the place of the divine, nor the divine of the human. This is the mystery of godliness.” {Ellen White, ST May 10, 1899, par. 11}

Did Christ Remain God at the Incarnation?

And the Word was made flesh and dwelt among us.” John 1:14

Christ had not ceased to be God when He became man. Though He had humbled Himself to humanity, the Godhead was still His own. {DA 663.5}

Great is the mystery of godliness: God was manifest in the flesh, justified in the Spirit, seen of angels, preached unto the Gentiles, believed on in the world, received up into glory.” The Saviour came into the world, outwardly the son of David, not manifesting the full significance of his character. His spirit was subject to that discipline and experience through which humanity must in some measure pass. His divinity was veiled beneath humanity. He hid within himself those all-powerful attributes which belonged to him as one equal with God.” {Ellen White, 3SP 259.1}

“It was poverty that, as He passed to and fro among the subjects He came to save, scarcely a solitary voice called Him blessed. Scarcely a solitary hand was stretched out in friendship, and scarcely a solitary roof proffered Him shelter. Then look beneath the disguise, and whom do we see? — Divinity, the eternal Son of God, just as mighty, just as infinitely gifted with all the resources of power, and He was found in fashion as a man.” {Ellen White, Lt37-1887.22}

How Could that be Possible?

Had He appeared with the glory that was His with the Father before the world was, we could not have endured the light of His presence. That we might behold it and not be destroyed, the manifestation of His glory was shrouded. His divinity was veiled with humanity,—the invisible glory in the visible human form. {DA 23.1}

Moses was a type of Christ. As Israel’s intercessor veiled his countenance, because the people could not endure to look upon its glory, so Christ, the divine Mediator, veiled His divinity with humanity when He came to earth. Had He come clothed with the brightness of heaven, He could not have found access to men in their sinful state. They could not have endured the glory of His presence. {PP 330.4}

“There were occasions when Jesus stood forth while in human flesh as the Son of God. Divinity flashed through humanity, and was seen by the scoffing priests and rulers…When Christ’s indwelling glory flashed forth, it was too intense for His pure and perfect humanity entirely to conceal. {ST May 10, 1899, par. 12-13}

“Christ had two natures, the nature of a man and the nature of God. In him divinity and humanity were combined. Upon his mediatorial work hangs the hope of the perishing world. {Ellen White, GCB October 1, 1899, Art. B, par. 20}

The Answer to All Contradictions

He exhibited a perfect humanity, combined with deity; and by preserving each nature distinct, he has given to the world a representation of the character of God and the character of a perfect man. He shows us what God is, and what man may become—godlike in character.” {GCB October 1, 1899, Art. B, par. 20}

“The two expressions human and divine were, in Christ, closely and inseparably one, and yet they had a distinct individuality. Though Christ humbled Himself to become man, the Godhead was still His own. His Deity could not be lost while He stood faithful and true to His loyalty. Surrounded with sorrow, suffering, and moral pollution, despised and rejected by the people to whom had been intrusted the oracles of heaven, Jesus could yet speak of Himself as the Son of man in heaven.” {ST May 10, 1899, par. 11}

“Our Lord was tempted as man is tempted. He was capable of yielding to temptations, as are human beings. His finite nature was pure and spotless, but the divine nature that led Him to say to Philip, “He that hath seen Me hath seen the Father” also, was not humanized; neither was humanity deified by the blending or union of the two natures; each retained its essential character and properties.”  {16MR 182.1}

Was Jesus given any sort of an advantage in comparison to the rest of humanity because of His inherent divine nature?

He Did Not Use Divine Power For His Own Benefit

“Not without a struggle could Jesus listen in silence to the arch-deceiver. But the Son of God was not to prove His divinity to Satan, or to explain the reason of His humiliation. By conceding to the demands of the rebel, nothing for the good of man or the glory of God would be gained. Had Christ complied with the suggestion of the enemy, Satan would still have said, Show me a sign that I may believe you to be the Son of God. Evidence would have been worthless to break the power of rebellion in his heart. And Christ was not to exercise divine power for His own benefit. He had come to bear trial as we must do, leaving us an example of faith and submission. {DA 119.3}

An example of trusting the Father can be found in Mark 4:36-40

Leaving the crowd behind, they took him along, just as he was, in the boat. There were also other boats with him.  (37)  A furious squall came up, and the waves broke over the boat, so that it was nearly swamped.  (38)  Jesus was in the stern, sleeping on a cushion. The disciples woke him and said to him, “Teacher, don’t you care if we drown?”  (39)  He got up, rebuked the wind and said to the waves, “Quiet! Be still!” Then the wind died down and it was completely calm.  (40)  He said to his disciples, “Why are you so afraid? Do you still have no faith?” Mark 4:36-40

When Jesus was awakened to meet the storm, He was in perfect peace. There was no trace of fear in word or look, for no fear was in His heart. But He rested not in the possession of almighty power. It was not as the “Master of earth and sea and sky” that He reposed in quiet. That power He had laid down, and He says, “I can of Mine own self do nothing.” John 5:30. He trusted in the Father’s might. It was in faith—faith in God’s love and care—that Jesus rested, and the power of that word which stilled the storm was the power of God. {DA 336.1}

“The prince of this world cometh,” said Jesus, “and hath nothing in Me.” John 14:30. There was in Him nothing that responded to Satan’s sophistry. He did not consent to sin. Not even by a thought did He yield to temptation. So it may be with us. Christ’s humanity was united with divinity; {DA 123.3}

Which Divinity? (His Own)

He was fitted for the conflict by the indwelling of the Holy Spirit. And He came to make us partakers of the divine nature. So long as we are united to Him by faith, sin has no more dominion over us. God reaches for the hand of faith in us to direct it to lay fast hold upon the divinity of Christ, that we may attain to perfection of character. {DA 123.3}

Why Does It Matter?

“Christ depended in the Father all the time… He who made the worlds was there in His divine presence all the time, but never did He allow Himself to appear at all or to do anything at all that was done. That was kept back, and when these temptations came upon Him, He could have annihilated them all with the assertion–in righteousness of His divine self. But if He had done so, it would have ruined us. To have asserted Himself, to have allowed Himself to appear, even in righteousness, would have ruined us, because we who are only wicked never would have had anything before us then but the manifestation of self. Set before men who are only wicked, manifestation of self, even in divine righteousness, as an example to be followed and you simply make men that much more confirmed in selfishness and the wickedness of selfishness. Therefore, in order that we in our wicked selves might be delivered from our wicked selves, the divine One, the holy One, kept under, surrendered, emptied all the manifestation of His righteous self. And that does accomplish it. He accomplished it by keeping Himself back all the time and leaving everything entirely to the Father to hold Him against these temptations. He was Conqueror through the grace and power of the Father, which came to Him upon His trust and upon His emptying Himself of self.” {A.T. Jones, p. 17, Para. 33, GC1895}

“Indeed, the fact that Christ is a part of the Godhead, possessing all the attributes of Divinity, being the equal of the Father in all respects, as Creator and Lawgiver, is the only force there is in the atonement. It is this alone which makes redemption a possibility. Christ died “that he might bring us to God” (1 Peter 3:18), but if He lacked one iota of being equal to God, He could not bring us to Him. Divinity means having the attributes of Deity. If Christ were not Divine, then we should have only a human sacrifice.” {E. J. Waggoner, CHR p. 43}