The Signs of Babylon 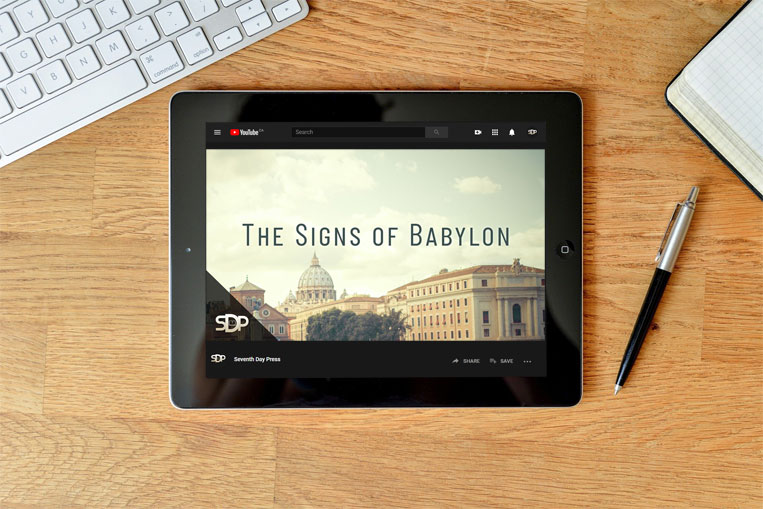 This presentation takes a look at 2 major signs of Babylon found in the book of Revelation chapter 17. Prophecy helps us stay on the path.

And there came one of the seven angels which had the seven vials, and talked with me, saying unto me, Come hither; I will shew unto thee the judgment of the great whore that sitteth upon many waters:

And the great city was divided into three parts, and the cities of the nations fell: and great Babylon came in remembrance before God, to give unto her the cup of the wine of the fierceness of his wrath.

It is important to note that “judgment” has 3 aspects.

The judgment in Revelation 17:1 is the sentence or what the sentence is going to be for the female prostitute. A female prostitute is someone who prostitutes themselves out for financial gain. A women in Bible prophecy represents a church (Jer 6:2; 2Co 11:2; Eph 5:23-27; Eze 16:15-58; 23:2-21; Hos 2:5; 3:1; Rev 14:4.) So here in Revelation 17:1 we have a church that is prostituting itself out for financial gain of some sort and God is going to pass a sentence or judgment upon her. Now we come to verse two:

So he carried me away in the spirit into the wilderness: and I saw a woman sit upon a scarlet coloured beast, full of names of blasphemy, having seven heads and ten horns.  (4)  And the woman was arrayed in purple and scarlet colour, and decked with gold and precious stones and pearls, having a golden cup in her hand full of abominations and filthiness of her fornication:

The word “decked” means to be golden. This women in other words is golden with gold. Verse 4 shows another powerful mark of Babylon “full of abominations”. What is an abomination in God’s eyes? Here are a few Scriptures dealing with abominations.

Abomination means something that is detestable. The bottom line is that sin is an abomination to God.

These six things doth the LORD hate: yea, seven are an abomination unto him:  (17)  A proud look, a lying tongue, and hands that shed innocent blood,  (18)  An heart that deviseth wicked imaginations, feet that be swift in running to mischief,  (19)  A false witness that speaketh lies, and he that soweth discord among brethren.

The information above gives us a broad overview of various abominations found in the Bible. We will now look at a few more abominations to God.

6. Offering a blemished sacrifice (Deuteronomy 17:1). Paul says we should offer ourselves a living sacrifice. But if we are offering ourselves with all this known sin that we are clinging onto, is not that an abomination to God? Yes, it is. He wants us to let go of these things.

If there arise among you a prophet, or a dreamer of dreams, and giveth thee a sign or a wonder,  (2)  And the sign or the wonder come to pass, whereof he spake unto thee, saying, Let us go after other gods, which thou hast not known, and let us serve them;  (3)  Thou shalt not hearken unto the words of that prophet, or that dreamer of dreams: for the LORD your God proveth you, to know whether ye love the LORD your God with all your heart and with all your soul.  (4)  Ye shall walk after the LORD your God, and fear him, and keep his commandments, and obey his voice, and ye shall serve him, and cleave unto him.

If thy brother, the son of thy mother, or thy son, or thy daughter, or the wife of thy bosom, or thy friend, which is as thine own soul, entice thee secretly, saying, Let us go and serve other gods, which thou hast not known, thou, nor thy fathers;  (7)  Namely, of the gods of the people which are round about you, nigh unto thee, or far off from thee, from the one end of the earth even unto the other end of the earth;  (8)  Thou shalt not consent unto him, nor hearken unto him; neither shall thine eye pity him, neither shalt thou spare, neither shalt thou conceal him:  (9)  But thou shalt surely kill him; thine hand shall be first upon him to put him to death, and afterwards the hand of all the people.

“neither shalt thou conceal him” – what this person says is to be revealed for a disciplinary action.

Certain men, the children of Belial, are gone out from among you, and have withdrawn the inhabitants of their city, saying, Let us go and serve other gods, which ye have not known;  (14)  Then shalt thou enquire, and make search, and ask diligently; and, behold, if it be truth, and the thing certain, that such abomination is wrought among you;  (15)  Thou shalt surely smite the inhabitants of that city with the edge of the sword, destroying it utterly, and all that is therein, and the cattle thereof, with the edge of the sword.  (16)  And thou shalt gather all the spoil of it into the midst of the street thereof, and shalt burn with fire the city, and all the spoil thereof every whit, for the LORD thy God: and it shall be an heap for ever; it shall not be built again.  (17)  And there shall cleave nought of the cursed thing to thine hand: that the LORD may turn from the fierceness of his anger, and shew thee mercy, and have compassion upon thee, and multiply thee, as he hath sworn unto thy fathers;  (18)  When thou shalt hearken to the voice of the LORD thy God, to keep all his commandments which I command thee this day, to do that which is right in the eyes of the LORD thy God.

And the woman was arrayed in purple and scarlet colour, and decked with gold and precious stones and pearls, having a golden cup in her hand full of abominations and filthiness of her fornication:

“full of abomination.” Notice that it is plural “abominations.”

So he carried me away in the spirit into the wilderness: and I saw a woman sit upon a scarlet coloured beast, full of names of blasphemy, having seven heads and ten horns.

John 1:1 destroys the Trinity doctrine. The verse says “…the Word was with God, and the Word was God.” How can Jesus be the God that He’s with? He cannot. That destroys a Trinity doctrine right there. But it clearly says that Jesus is God. In John 20:28 Thomas answered Jesus and said unto him “My Lord and my God.” Does that mean Jesus is the Father? No, He is not the Father but He is God. Even God said so in Hebrews 1:8 “But unto the Son he saith, Thy throne, O God, is for ever and ever:” and in Titus 2:13 “the great God.” But is Jesus the original God? No, He is the express image of the original. He is 100% divine but He is the express image of the original. To claim Jesus to be something that He is not would fit under blasphemy.