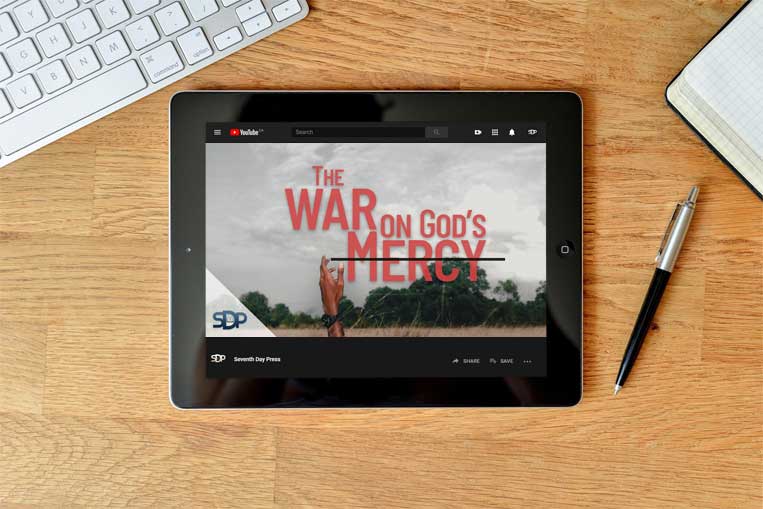 This presentation looks at God’s mercy in light of His justice and how the enemy of souls attacks this most precious attribute of God.

Another extreme which Satan has led the people to adopt is to entirely overlook the justice of God, and the threatenings in His word, and to represent Him as being all mercy, so that not one will perish, but that all, both saint and sinner, will at last be saved in His kingdom. (The Bible echo, august 10, 1896, par. 6)

1 Corinthians 3:17  – If any man defile the temple of God, him shall God destroy; for the temple of God is holy, which temple ye are.
Psalms 143:12  – And of thy mercy cut off mine enemies, and destroy all them that afflict my soul: for I am thy servant.
Psalms 145:20  – The LORD preserveth all them that love him: but all the wicked will he destroy.

Psalms 85:7-10  Shew us thy mercy, O LORD, and grant us thy salvation.  (8)  I will hear what God the LORD will speak: for he will speak peace unto his people, and to his saints: but let them not turn again to folly.  (9)  Surely his salvation is nigh them that fear him; that glory may dwell in our land.  (10)  Mercy and truth are met together; righteousness and peace have kissed each other.

Zechariah 3:1  And he shewed me Joshua the high priest standing before the angel of the LORD, and Satan standing at his right hand to resist (H7853 – to attack, accuse) him.
Revelation 12:10  And I heard a loud voice saying in heaven, Now is come salvation, and strength, and the kingdom of our God, and the power of his Christ: for the accuser of our brethren is cast down, which accused them before our God day and night.
1 Peter 5:8  Be sober, be vigilant; because your adversary the devil, as a roaring lion, walketh about, seeking whom he may devour:

God’s love has been expressed in His justice no less than in His mercy. Justice is the foundation of His throne, and the fruit of His love. It had been Satan’s purpose to divorce mercy from truth and justice. He sought to prove that the righteousness of God’s law is an enemy to peace. But Christ shows that in God’s plan they are indissolubly joined together; the one cannot exist without the other. “Mercy and truth are met together; righteousness and peace have kissed each other.” Psalm 85:10. (Desire of Ages, p.762.3)

Another deception was now to be brought forward. Satan declared that mercy destroyed justice, that the death of Christ abrogated the Father’s law. Had it been possible for the law to be changed or abrogated, then Christ need not have died. But to abrogate the law would be to immortalize transgression, and place the world under Satan’s control. It was because the law was changeless, because man could be saved only through obedience to its precepts, that Jesus was lifted up on the cross. Yet the very means by which Christ established the law Satan represented as destroying it. Here will come the last conflict of the great controversy between Christ and Satan. (Desire of Ages, p.762.5)

2. Mercy in the Sanctuary

In the temple in heaven, the dwelling place of God, His throne is established in righteousness and judgment. In the most holy place is His law, the great rule of right by which all mankind are tested. The ark that enshrines the tables of the law is covered with the mercy seat, before which Christ pleads His blood in the sinner’s behalf. Thus is represented the union of justice and mercy in the plan of human redemption. This union infinite wisdom alone could devise and infinite power accomplish; it is a union that fills all heaven with wonder and adoration. The cherubim of the earthly sanctuary, looking reverently down upon the mercy seat, represent the interest with which the heavenly host contemplate the work of redemption. This is the mystery of mercy into which angels desire to look—that God can be just while He justifies the repenting sinner and renews His intercourse with the fallen race; that Christ could stoop to raise unnumbered multitudes from the abyss of ruin and clothe them with the spotless garments of His own righteousness to unite with angels who have never fallen and to dwell forever in the presence of God. (Great Controversy, p. 415.2)

Scriptures Not Against the 6th Commandment:

Matthew 5:21-22  Ye have heard that it was said by them of old time, Thou shalt not kill; and whosoever shall kill shall be in danger of the judgment:  (22) But I say unto you, That whosoever is angry with his brother without a cause shall be in danger of the judgment:
1 John 3:15  Whosoever hateth his brother is a murderer:
Genesis 3:24 – So he drove out the man; and he placed at the east of the garden of Eden Cherubims, and a flaming sword which turned every way, to keep the way of the tree of life.
Numbers 15:35 – And the LORD said unto Moses, The man shall be surely put to death: all the congregation shall stone him with stones without the camp.
Matthew 10:28 – And fear not them which kill the body, but are not able to kill the soul: but rather fear him which is able to destroy both soul and body in hell.
Ecclesiastes 3:17  I said in mine heart, God shall judge the righteous and the wicked: for there is a time there for every purpose and for every work.
Ecclesiastes 3:1-3  To every thing there is a season, and a time to every purpose under the heaven: (2) A time to be born, and a time to die; a time to plant, and a time to pluck up that which is planted; (3) A time to kill, and a time to heal…

All acts of injustice that tend to shorten life; the spirit of hatred and revenge, or the indulgence of any passion that leads to injurious acts toward others, or causes us even to wish them harm (for “whosoever hateth his brother is a murderer”); a selfish neglect of caring for the needy or suffering; all self-indulgence or unnecessary deprivation or excessive labor that tends to injure health—all these are, to a greater or less degree, violations of the sixth commandment. {PP 308.5}

Could those whose lives have been spent in rebellion against God be suddenly transported to heaven and witness the high, the holy state of perfection that ever exists there,—every soul filled with love, every countenance beaming with joy, enrapturing music in melodious strains rising in honor of God and the Lamb, and ceaseless streams of light flowing upon the redeemed from the face of Him who sitteth upon the throne,—could those whose hearts are filled with hatred of God, of truth and holiness, mingle with the heavenly throng and join their songs of praise? Could they endure the glory of God and the Lamb? No, no; years of probation were granted them, that they might form characters for heaven; but they have never trained the mind to love purity; they have never learned the language of heaven, and now it is too late. A life of rebellion against God has unfitted them for heaven. Its purity, holiness, and peace would be torture to them; the glory of God would be a consuming fire. They would long to flee from that holy place. They would welcome destruction, that they might be hidden from the face of Him who died to redeem them. The destiny of the wicked is fixed by their own choice. Their exclusion from heaven is voluntary with themselves, and just and merciful on the part of God. {Great Controversy, p.542.2}

4. Mercy in the Three Angels Messages

Revelation 14:6-12  And I saw another angel fly in the midst of heaven, having the everlasting gospel to preach unto them that dwell on the earth, and to every nation, and kindred, and tongue, and people,  (7)  Saying with a loud voice, Fear God, and give glory to him; for the hour of his judgment is come: and worship him that made heaven, and earth, and the sea, and the fountains of waters.  (8)  And there followed another angel, saying, Babylon is fallen, is fallen, that great city, because she made all nations drink of the wine of the wrath of her fornication.  (9)  And the third angel followed them, saying with a loud voice, If any man worship the beast and his image, and receive his mark in his forehead, or in his hand,  (10)  The same shall drink of the wine of the wrath of God, which is poured out without mixture into the cup of his indignation; and he shall be tormented with fire and brimstone in the presence of the holy angels, and in the presence of the Lamb:  (11)  And the smoke of their torment ascendeth up for ever and ever: and they have no rest day nor night, who worship the beast and his image, and whosoever receiveth the mark of his name.  (12)  Here is the patience of the saints: here are they that keep the commandments of God, and the faith of Jesus.

Another deception was now to be brought forward. Satan declared that mercy destroyed justice, that the death of Christ abrogated the Father’s law. Had it been possible for the law to be changed or abrogated, then Christ need not have died. But to abrogate the law would be to immortalize transgression, and place the world under Satan’s control. It was because the law was changeless, because man could be saved only through obedience to its precepts, that Jesus was lifted up on the cross. Yet the very means by which Christ established the law Satan represented as destroying it. Here will come the last conflict of the great controversy between Christ and Satan. (Desire of Ages, p.762.5)

That which constitutes this wrath is the seven last plagues. They are by this term distinguished from those plagues inflicted under the six trumpets. Rev.9:20,21. They are represented as the wrath of God without mixture, i.e., they have no element of mercy mingled with them. They are poured out into the cup of God’s indignation. This is an awful expression to indicate that men at that time fall into the hands of the living God. This fearful execution of God’s judgment is witnessed before the deliverance of the saints; for not less than six of the plagues are poured out prior to the advent of Christ. Rev.16:12-15. (The Judgment. Its events and Their Order – J.N. Andrews, p 90)

5. Mercy in Your Life

Those who wait for the Bridegroom’s coming are to say to the people, “Behold your God.” The last rays of merciful light, the last message of mercy to be given to the world, is a revelation of His character of love. The children of God are to manifest His glory. In their own life and character they are to reveal what the grace of God has done for them. {COL 415.5}

John 6:37  All that the Father giveth me shall come to me; and him that cometh to me I will in no wise cast out.